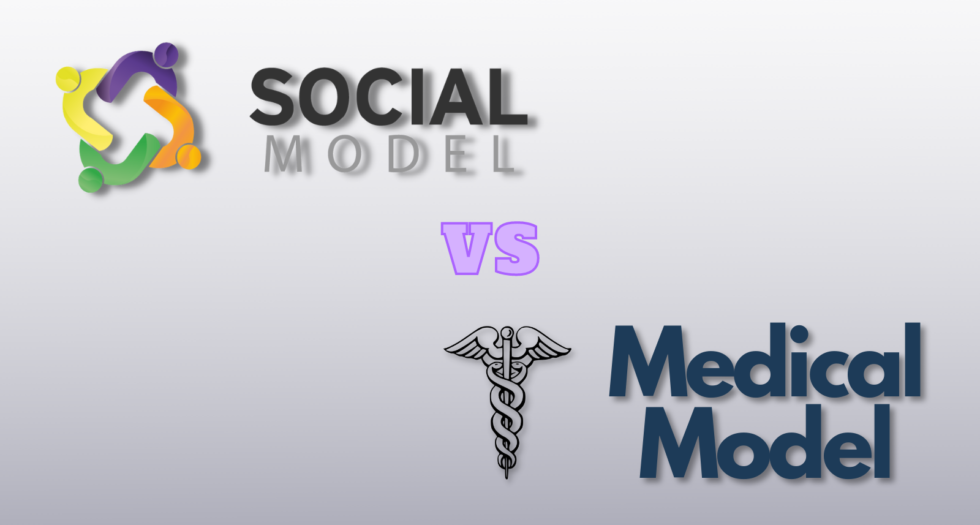 I have no doubt that you are all familiar with the medical model of disability.  Even if you don’t know it by name, chances are you’ve grown up with it and I’m sure it almost feels ‘natural’ to some of you.

The Medical Model frames disability as a health condition that needs to be cured or treated by a medical professional.  The individual has something wrong with them and needs to be fixed so they can function within our society.

Alternatively, the Social Model frames disability in a different way.  Our society has something wrong with it and needs to be fixed so the individual can function effectively within it.
Below I’ll discuss in more detail where each of these models came from and how they shape the way we deal with disability.

The medical model of disability has been the dominant model since the Age of Enlightenment around 300 years ago.  Before this the Religious Model was prevalent in Wester Judea-Christian society, where disability could either be seen as a divine blessing or the result of evil spirits, the devil, witchcraft, or God’s displeasure.  In the early 1700’s doctors and scientists began replacing priests and holy people as the custodians of societal values and the curing process.

The human body had now been medicalised and was seen as something that could be controlled.  The ‘experts’ defined what a normal body should be and anybody deviating from that was seen as defective and abnormal in some way.  This promoted the disempowered image of disability in our society, where people in possession of these ‘abnormal’ bodies are seen as pitiable or needing to be institutionalised to deal with their condition, sometimes against of their wishes.

The medical model of disability has been influencing the development of our culture for the last three centuries and has unsurprisingly been enshrined in government legislation and policy around the world.  Within these systems people with disability can easily and legally have control over their lives taken away.  These systems have also influenced both the built and social environment, so a person with disability faces many barriers trying to operate in a world constructed for and by ‘normal’ people.

The phrase social model of disability was coined by disability advocate Mike Oliver in his book Social Work with Disabled People in 1983, but the idea of society disabling people can be traced back a little further.  In 1969, Alf Morris, a politician and disability campaigner in the UK hit upon the idea of society handicapping people with disability. Then in 1975, the UK organisation Union of the Physically Impaired Against Segregation claimed that it was society who disabled people rather than impairments.

The distinction between term impairment and disability is central to understanding the social model of disability.  Impairment refers to the actual attributes (or lack of attributes) that affect an individual.  Disability refers to the restrictions caused by society when it does not accommodate the needs of individuals with impairments.

Positioning disability in terms of social relations allows us to see that it is not the individual who must alter themselves to access society, but that we should be altering society to be accessible to the individual.
Under this model, people with disability are no longer ‘objects’ of charity, medical treatment, and social protection.  They are instead seen as ‘subjects’ with rights, choices, and control over their own lives.

Where to from here?

The social model is by no means the answer to all the issues surrounding disability, but it is far more useful in helping us to understand disability as a society and work towards a more inclusive culture than the medical model.  It should also be mentioned that the social model also has its downsides, even though it has been a powerful vehicle for change so far.

Adopting the social model into government policy and legislation could also allow us to move misdirected resources from a medical focus into areas with a greater positive effect, like universal design and inclusion practices. In saying all this, it is important to note that I am not denying the very necessary role that medical science plays in keeping people alive, improving functionality, and reducing pain.

I hope that what I’ve written here has helped to clarify the differences between the social model and the medical model of disability.
I personally do my absolute best to embody these beliefs in my own life and have started a business that assists people with disability to discover and achieve their goals. It is called Social Model after the very thing I have just been writing about.
Please take the time to check out our services and get in touch if you think we could be of assistance.